“…Climbed a mountain and I turned around
And I saw my reflection in the snow covered hills
‘Til the landslide brought me down.”  (1975)   “Landslide”  Recorded by:  Fleetwood Mac  Composer:  Stevie Nicks

The cover picture above tells the tale fairly well, before I get to the tail of this post.

Photo:  Bonnie taking her naps on my printer.

I’ve never been a cat person.  I was born and raised with a dog which started a long life of canine palship ever since.  For a short stint, when I was five years old, we had a couple of cats named, “Pete & Repeat”.  They didn’t have much to do with me, with the exception of giving me cat scratch fever.  So, my heart has been wrapped around, what one of my daughters once called, “Dogness”.

Then in 2017 I remarried.  Inheriting a step-cat was part of the wedding vows.

Bonnie-Bon, as we call her, stole my heart right away.  This little brindle feline loves to cuddle with me when she comes inside for some family time.  She curls up in my lap next to the arm of the recliner, along with a light blanket under her.  She enjoys cocking her head in focus as she paws at my goatee.  If I’m writing at my desk she will often make her place on my printer, only after she walks across my keyboard, jotting down statements only she can decipher.  She will scare the stuffings out of me as I sit in the living room when I suddenly hearing someone playing the piano in the study/studio two rooms over.  Frankly, it sounds like a kid banging away on the keys in efforts to mimic a maestro once seen on Great Performances on PBS.  I’ll jerk my head over to see the doorway of the study/studio just in time to see little Bonnie prancing out of the room as if she had accomplished something of high esteem.  The shocking part is, she is not sporting tux & tails.  (Well, maybe the tail part.)  The best part of Bonnie’s personality, she enjoys our two dogs, even to the point of running about with them as if she’s part of a pack.  Believe it or not, she has learned to mimic a dog’s bark.  She needs to be a guest on a late night talk show.  Yes, I’ve grown very fond of our Bonnie. 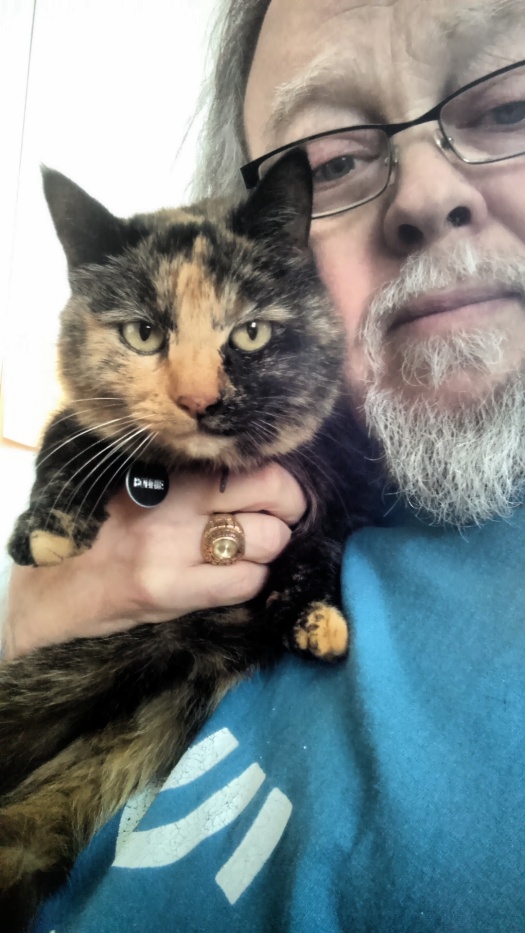 If you’re a pet-person than you know how it is.  There’s a tendency to be massaged into thinking of your pal-of-another-kind as almost human.  Thus, we begin to speak to them as if they have human minds, wants, and needs.  So true, until they bring in a dead rodent to present as a trophy right in the middle of the kitchen floor.  Not long ago, not once, but twice, Bonnie brought in a live lizard, about 4″-5″ in length.  Not realizing she had it jailed inside her mouth, there was no urge to run her outside.  Instead, she plopped herself down, looked up at us and dropped her prize on the floor, accompanied by a gigantic meow.  Of course, once free from its cell, it ran across the room making a mad dash under the range oven for shelter.  Arg!  Suddenly, I came to the realization that Bonnie was not a human little girl after all.  In both events we caught the reptilians in another room of the house the following day.

Bonnie spends most of her time in the small sun-room adjacent to the back-steps leading to the backyard.  You might say, the backyard is her jungle, her domain, her personal wildlife preserve, where I’ve witnessed her sitting like a statue in the bushes, as if to say, “Nothing to see here.  Move on.” 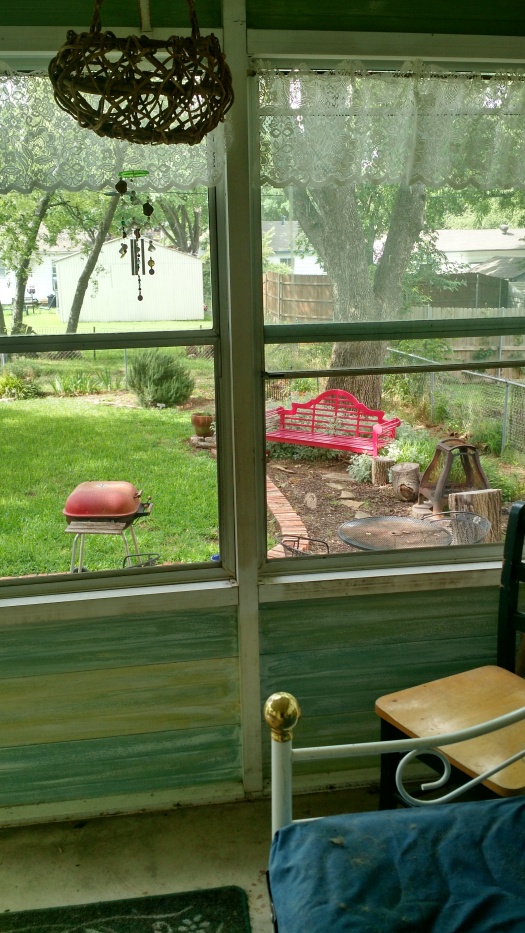 A few days ago, my wife, Michelle, was in the backyard watering the plants.  Our two dogs and Bonnie were out with her enjoying a warm morning in Texas.  Michelle heard a loud, frantic call from a nearby bird.  She spotted an agitated mockingbird yelling her obvious profanities from a lower limb from one of our trees.  She quickly flew from that perch to the top rail of the fence, to another tree, and so on.  Michelle tried to calm the feathered frantic female as she walked around with the garden hose.

The following morning, Michelle walked out into the sun-room and spied the body of a juvenile mockingbird laying at the back door threshold.  The body wasn’t mangled, half-eaten, or torn.  Of course, immediately she put the backyard events from the day before together with the current crime scene.  With a huge sigh, she shouted, “Bonnie-Bon!  You baby bird murderer!”  As expected, Bonnie just sat there on her fanny looking very proud.

Then, morning #2 came.  Michelle walked out into the sun-room to put cat food in Bonnie’s bowl when she saw it.  Another crime scene, in the very same location.  This time, two baby mockingbirds side-by-side, lined up ready for the crime scene photo for the crime lab.  She heard a bird chirp a few feet away.  There, on the back-step handrail, the mama mockingbird.  She was just looking at her deceased babies and Michelle.  She chirped again as if to utter, “Can you fix them?”  Michelle told me later she almost cried at the sight of the saddened mama.  She spoke to her in shared grief, “I’m so sorry, little mama.  I’m so sorry.”

(Excuse me while I grab a tissue.  Wait right here.  I’ll be back.)

A couple of days later, I was watering the plants in the backyard.  I heard several sirens going by in the distance.  The city had warned the residents of a local protest event just a few blocks from our street.  With the riotous mayhem of late, leaving cars and businesses burned or looted, all I could think of was protecting my home.  Then the mockingbird and Bonnie came to mind.

America, and the entire world, have suffered great loss at the jaws and claws of COVID-19.  Then, just as America began to show signs of improvements in the struggle to defeat the virus, the tragic murder of a black man at the hands of a white police officer took place in Minneapolis, launching a barrage of protests across the nation.  Inside the various groups of protesters were anarchists stalking, waiting and ready to use the peaceful protesters as a front to scorch us…we, the people.

It has been said many times in the media that many will not come out the other side of the pandemic intact, some, not at all.  Suicides jumped to record highs.  Drug use has skyrocketed.  Domestic violence has forged its way into the record books.  Vast unemployment landed on most of the population.  Many small and medium sized businesses went belly-up, unable to glide through the torrent of the shutdown’s gravitational pull.  Untold amounts of students have fallen behind due to the closure.  A multitude of deaths have been recorded due to the pandemic.  The punch has been painful.  No one, being honest, would say we are not in a weakened condition.

The leadership of anarchist groups sat still in the shrubbery of the COVID calamity, injecting a dose of national turmoil, just planning a time when a tripwire would be sprung for the pouncing of evil deeds to be lashed upon a battered society.  Yes, that’s right.  I called it “evil”.  If you’re offended, just know I was offended first.  Since the planning and stalking of these murderous groups, countless people have been displaced, injured, and murdered.  The enforcement of public safety for our neighborhoods has been violently assaulted, abused, and dishonored.  In the wake of this pouncing on our nation’s remains are ruined lives, torched dreams, hell-lit hopes.  In the clearing fog of the crippling pandemic, were those perched to destroy America from the inside out, having attempted to breakdown whatever else remains intact.  Meanwhile, those left alive who helped to build this commonwealth of people at liberty, sit helplessly on the handrails to weep at the carnage and wreckage the emptied-souls have waged.

Solomon wrote that there is a time for mourning.  It indicates the mourning is momentary.  When mourning is over, there is the courageous fight, the strength, the victorious raising of the torch for those who come after us.

On a hopeful note, THIS is AMERICA!  Our liberty was fought for several times over.  Our roots are buried here in blood-soaked soil.  The majority of citizenry, the loving, hard-working public of all shades of skin in this nation will stand for justice, law and order, as well as flushing out injustice.  Beyond this truth, there is a God of Righteousness Who birthed this country.  He gave us the right to vote in free elections to remove and place our local and federal representatives, along with various public servants at will.  He still sits on His throne.  Nothing, has not been filtered through His Almighty hand.

As for Bonnie…I’m so grateful she is not 500 pounds. 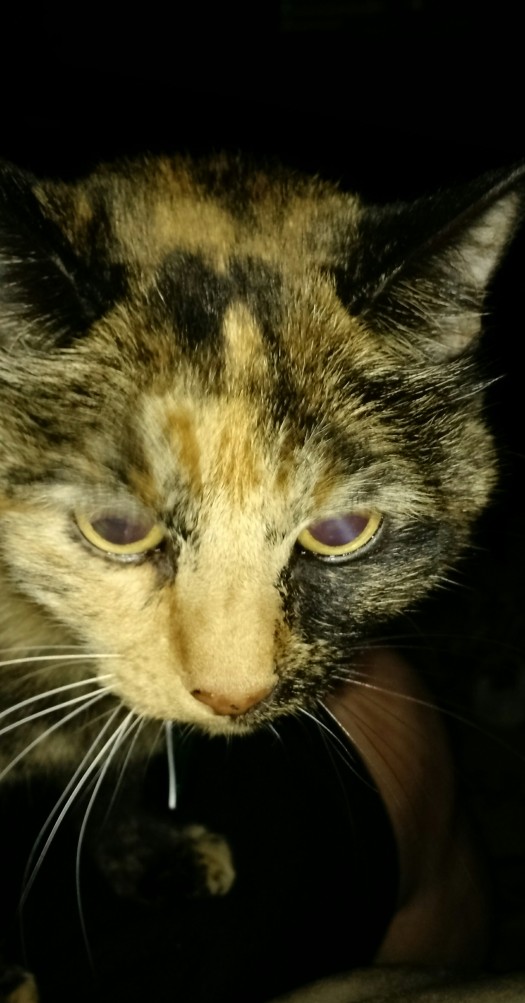 Gravity is a harsh reality when out of the nest.  Nestle safely in fuel for the race.

“Be alert, be reflective, because your enemy Satan roars like a lion and is walking and seeking whom he may devour.”  1 Peter 5:8   (Aramaic Bible In Plain English)

7 Replies to “Lessons From The Backyard”