“…In my thoughts I have seen
Rings of smoke through the trees
And the voices of those who standing looking…”  (1971)  Stairway To Heaven.  Recorded By:  Led Zeppelin.  Composed by:  Jimmy Page and Robert Plant.

Have you ever found yourself on your back, underneath a tree, just looking through the branches as a breeze sways them from side to side?  Have you ever walked through a wooded area and heard the unique creaking of timber as the branches and limbs wave to the rhythm of the wind?  For me they are mesmerizing moments.

Then there are the wrecking storms which reverse the pleasantries of our trees.  Snap, crackle, and pop!  Suddenly those precious branches that speak in their unique language are left broken, split, and hanging from violent winds.  Afterwards, the clean-up is launched…if procrastination doesn’t have its way.

They say October is a good month for pruning select trees, depending upon where you live, although I know very little about it.  However, we had to swing into it recently.

Over the last several months we have had at least four damaging storms rush through our immediate neck of North Texas.  This blog tells of some of those trying times.  We have a few trees on our property, and they always suffer after major wind events.  If you came over for a backyard BBQ you would observe limbs and branches, some dead and dried up, left dangling, or loosely swinging from larger branches.  One rather large branch, maybe 20 feet in length, has been hanging vertically way above the back steps of our sun-room leading to the backyard.  Literally it has been clinging and swinging by a few strands of the broken timber up top.  Something had to be done.  When September proved to be a rather hot, but calm weather month for us, we felt like the gettin’ was finally good.

A family owned lawn care service was recommended to us by a good friend who lives not even a mile away.  We called for an estimate.  They came out, took a look at the job, which involved a total of four large trees, and gave us an outstanding price.  I just love the sound of chainsaws in the morning.

Little did we know, the tree-trimming team wasn’t insured.  What’s worse, they only do lower hanging limbs and branches.  YIKES!  Okay, so they didn’t tell us that when they presented the estimate, but onward and upward they went.  I sat in a lawn chair under the pecan tree to observe.  After all, if there was going to be a Texas chainsaw massacre, I at least wanted to be an eye-witness for the litigation to come.  All-in-all, without too much trouble, (although there were some vertigo moments), they did a fine job.  I’ll give them a B+, considering the tree climber wore cowboy boots to scale the trunks.  There were some high limbs they felt were too risky, but we let it slide.  In less than two hours they cut on the troublesome trees, sawed up smaller lengths of the branches, placed it all in a pile by the curb, raked and swept-up residual twigs and leaves, and off in their truck they went.  Quicker than you can say sawdust, they eagerly took my $50.00 tip.

Those in the know call it an “Umbrella Cut”, which sounds like something I might hear in a barber shop.  After the job was complete, I could see why they give it the name.  Of course, not only do the trees have a better appearance, but they will be healthier, not to mention safer.

As I looked at the pile of dead, or dying limbs and branches by the street, I couldn’t help but think about my own tree of life.  Inventory, a true, honest inventory of life, can suck.  Look, there is a dangerous branch up top from my past which still dangles when the slightest gust comes my way.  Duck!  If unaware that 45 year old lower limb, once badly-placed from wilder days, can knock you flat, and its got plenty of bark left.  Ah, on the other side, observe the crooked hanging limb in my years, ready to extract all the sap intended for the healthier, sturdier branches above it.  Careful, don’t walk under that long branch hanging vertically.  To this day it keeps the young branches stunted in growth.  Do I miss them all?  They were important in my life at one time, or so I imagined, but God broke them from the trunk because there was a danger to my house.  Except for that one right over there.  Do you see it?   Unfortunately, day and night, it nourishes my messed-up thought-life, spreading its twigs and seeds.  It shouldn’t remain. No doubt the great Arborist will remove it from my trunk when He decrees.  When He does, I will be a healthier person with rock solid roots.

Can you identify?  It’s true, we all need pruning sometimes.  A life pruned tends to hurt.  Why should the living be among the dead?  Right?  The dangerous, menacing dead wood needs to be taken down and shown to the curb. 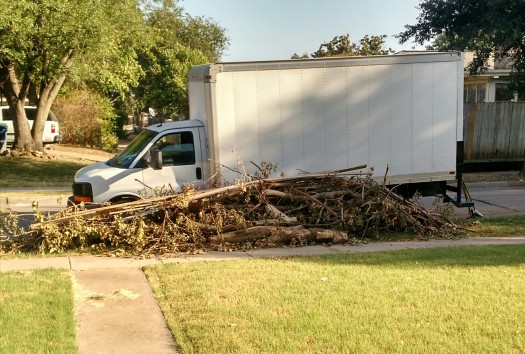 I’ve learned when it comes to a choice of life or limb…life is better.  After His chipper does its work, the mulch can be added to my fuel for the race.

“I am the true grapevine, and my Father is the gardener.  He cuts off every branch of mine that doesn’t produce fruit, and he prunes the branches that do bear fruit so they will produce even more.”  -Jesus-  John 15:1-2 (NLT)

14 Replies to “Branching Out”