It was early in 1998.  There I was, with two copies of my new script in a saddle-leather briefcase with the strap over my shoulder.  A friend of mine (I will call him Jon, because that’s his name LOL.) agreed to meet me at the Cracker Barrel restaurant in Arlington, Texas (Between Dallas and Ft Worth.) for a pre-production lunch meeting.  As a producer, director, writer, actor, I was acquainted with wearing all the hats way too often for my productions.  In this case, circumstances required an executive producer to help me launch my next three-act stage play.  Frankly, I was relieved.  But I needed someone I could trust.  Jon was always pitching the idea to bring a production to his suburban community.  We had been in musicals together, as well as, duos on stage, and choral work.  Off the stage, together we produced an original song for a scene in one of my radio theater plays.  So, it seemed right to ask him to be my executive producer while I agreed to take care of everything else.

After scheduling arrangements through phone calls, complete with email confirmation, we were to meet for lunch at 11:00.  Double checking our emails, I knew the exact time to leave my house, which was some 35 minutes away from Arlington.  My radio drive-time show began at 2:30, but the radio station was only a quick 10-15 minutes from the restaurant.  If the meeting went long, the clock gave me a buffer.

I am always early for everything.  That’s just who I am.  I’ve always hated rushing around in the attempt to arrive on time.  If I don’t, I can get scatter-brained.  Plus, being a radio guy, I was living and dying by the broadcast clock.  Literally, half-seconds are counted on-air when back-timing for hard commercial breaks, or news drops.  It’s something you tend to take home with you.

11:00 rolled around as I checked my watch.  No Jon.  Cracker Barrel has a gift shop inside their front door.  You have to wade through all the candies, gadgets, and silk-screened t-shirts to arrive at the front counter, as well as, the host/hostess station for seating.  So, I browsed away at the pecan logs, moccasin style coin purses, and plastic bobble-head dashboard figurines way beyond my actual curiosity.

I checked my watch…11:27.  No Jon.  Hummmm.  So, I remembered that the restaurant had a selection of wooden rocking chairs outside on the porch area.  After exhausting myself among the peanut brittle and beef jerky, off I went to explore the various rustic patio furniture.  It was a cool morning, but tolerable.  I walked among the presentation of rocking chairs, looking at the price tags while talking to myself.  Suddenly, realizing they were all just about identical styles and colors, I chuckled at myself for doing all I could to kill time as I rocked in one of the chairs.

By that time the watch said 11:45.  No Jon.  I checked my cell phone only to find I hadn’t received any texts or missed phone calls.  Hummmm.  I didn’t want to call him, knowing he was probably driving like a mad hatter to get there.  After counting all the cars and pick-up trucks in the parking lot, I began counting all the green cars and trucks, vs the blue cars and trucks.  Yep, it was getting a tad stupid.  Thinking I should spend my time more productively, I pulled out a copy of my script and began reviewing like a script editor.  (Any actor that has worked with me knows that’s dangerous.  I tend to find words I want to add, or rearrange scenes, or dump a character.  I also tend to remove myself from my surroundings when this occurs as the clock gets devoured.)  Halfway through the script, about where I placed the intermission, my watch read 12:52!  NO JON!  I must admit, miffed is a kind way of interpreting how I felt.  My 2:30 radio show obviously was to happen without show-prep, or a fresh pot of coffee at that point in the waiting.  The next thing on the docket would be my frantic producer/co-host calling me in a panic wondering where I was.  Arg!

By now you must be wondering why I didn’t give up and leave the place.  I’m quirky that way, I guess.  Nobody can accuse me of one who gives up easily.  However, there was a thought to give him until 1:10 for the drop-dead time.

About 1:00, two hours after our scheduled lunch appointment, Jon pulled leisurely into the parking lot.  As I waved away the steam coming out of my ears, I could see him walking up toward me, totally relaxed and unhurried with every hair in place.  Go figure.

I grinned, as I bit my tongue, “Boy, me too.  I’m short on time, but I can woof down a burger quicker than anyone I know.”  And with that greeting, in we went.  With the two hour gap, I wondered if he had made a trip to L.A. forgetting to change his watch back to central time.  Who knows?

The funny thing is, he never said why he was late.  He never apologized for keeping me waiting.  The scripture passage says, “Wait on the Lord…”, but not Jon.  I avoid confrontation whenever I can.  Never did I mention the late hour at all.  It seemed okay just to play off his mindset of the moment in the attempt to hide my angst.  After all, there was much to discuss with few tick-tocks to do it in.

Have you been there…in the waiting?  For you, maybe it was that time when you were in a hospital waiting room, counting the rectangular panels on the ceiling, hoping all would go well in the O.R. 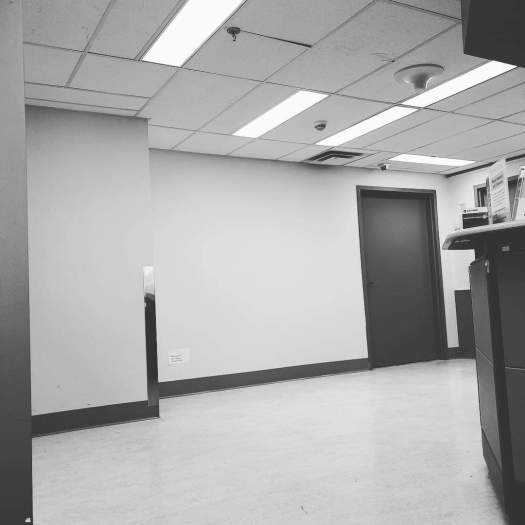 It could be something as benign as sitting in traffic everyday, or that long traffic light at your most hated intersection.  How about when you’re in a jury pool, with scads of other citizens, waiting all day for your name to be called?  How many outdated magazines can one read in a day?  Maybe you’re thinking of the time you waited up for a very late, non-communicative teenager on a Saturday night.  (Oh, don’t get me started on that one.)  Maybe it was after a first diagnosis, while in the waiting for test results to confirm, or a second opinion.  The cruel clock can just be a mocker sometimes.

However, it’s up to the individual to caress the realities of this journey between beginning and ending.  It’s the duty of each to embrace the joy in the journey, even during times of hardship, pain, and frustration.  It’s what we make of our speed-bumps and the cliffs ahead.  We can stroll among the identical rocking chairs, comparing the price tags, or burn them all in anger because they’re not different.

One thing is for certain.  Above all else, time marches on.  The famous Rolling Stones lyric is wrong.  Time is NOT on our side.  Mick Jagger just discovered this in his own life.  As much as we want it to be, time is not a respecter of persons.  Ask any plastic surgeon.

There is a beginning, and it assures us there will be an ending.  Everything in the middle proves to be just the space between the certainties of beginnings and endings.  With the exception of a sphere, or circle, all has a beginning and ending.  In jazz you will discover chords can be created with dissonance.  Often the time signature has these chords sustained for the ear to grasp the clash of pitches.  Oftentimes, the ending of a score in jazz does not resolve, leaving the ear hunting for a major key chord of solution.  Not so much in life.  Endings are not always pleasant, or wanted, but they push through the maze of waiting.  Expect a resolution to all things in this physical world.  In the middle of our stage entrance and exit, we find ourselves in the waiting…sometimes listening to jazz.

How often have you heard an elderly person say they inwardly feel like they did as a teen, spry, energetic, with youthful thoughts?  There’s a purpose for that testimony of the aged.  It’s all about the soul, or the spirit.  I’ve written about this before, and for good reason.  Often interchangeable in print or speech, the soul/spirit, is eternal.  (I often think of the spirit as the emotion, or intellect.  This disappears when the brain is dead, diseased, or damaged.  Yet, the soul is far deeper.)  In fact, some medical researchers have put a weight to the soul as it leaves the body.  It’s been documented at 21 grams.  No matter how the wrinkles and lines redraw the face and hands, the soul remains timeless.

In a lengthy post, found in my archives, I shared my near death experience.  (See “Confronted By Death…” dated Feb 11, 2018.)  Actually, I should say, “death” experience, as I was found dead and brought into the E.R. dead.  Let me just say, they call it “Passing Away” for a reason.  Literally meaning, “Moving Out (in motion)”.  That event changed my outlook and daily life.  Since I have written about it exhaustively, I won’t do so here, but I will repeat something I KNOW to be true.  This body we live in is an EARTHSUIT.  It is a shell created for this planet’s temps and atmosphere, exclusively.  The more we discover other planets, the more certain this becomes.  We rent this thing we call “the body.”  It begins to degrade the moment we are born.  When “it” dies, “YOU”, the person in whom you are, the soul of yourself, moves out.  You leave your remains behind like an old apartment you once knew and took care of.  When the old ’72 Chevy gives up the ghost, it’s time to get out from behind its steering wheel.  Later, in a salvage yard, someone might be able to use its hubcaps, or dipstick if not too corroded.  But the realization is, “YOU” are no longer in that rusted-out car.  It’s like the discarded empty cocoon, left to degenerate on the branch.  Look at it this way; the body that dies has come to the end of the waiting.  Not unlike Elvis, the being has left the building.

Meanwhile, soul/spirit/body wrestles in the waiting, before shedding what corrodes, to be who we are inwardly, discarding the waiting.  You can visit my grave after my body fails to revive, but don’t ever say, “Buried here is Alan.”  Say hello.  I won’t answer.

Meanwhile, the waiting may be long, or short.  My personal Act I, Act II, and Act III have their moments, their twists and turns, leaving me to wonder how much longer to curtain call.  The Executive Producer, the Ancient Of Days, of my life may seem late, but He’s always on time.

Jon and I worked together very well, selling out each show later that year.  Moreover, we went on to sing together in various venues, as well as, stage musicals.  It was worth being in the waiting.

When discovering and accepting the Author of Easter, one never waits for fuel for the race.

“For God so loved the world, that He gave His only begotten Son, that whoever believes in Him shall not perish, but have eternal life.  For God did not send the Son into the world to judge the world, but that the world might be saved through Him.  He who believes in Him is not judged; he who does not believe has been judged already, because he has not believed in the name of the only begotten Son of God.”  – Jesus –  In John 3:16-18. (NAS)

7 Replies to “In The Waiting”