He walked into Wolf City, Texas junior high classroom for the first time, straight from his Oklahoma stomping grounds.  Being the new kid in town, he had yet to make friends.  She looked up, locking her kind and smiling blue eyes on this ruddy, wavy, auburn-haired boy.  He had a swagger, which was alien to the other boys, and a subtle, lopsided grin from one corner of his mouth, as if he were holding secrets nobody else knew.  His dark brown eyes shifted toward the brunette beauty sitting at her desk, trying to look busy.  They were studious in that they studied one another from minute one.  Later, “Lucky” –my granddaughter’s middle name — was the nickname placed on him because of his special catch.  The name stayed with him for the next seven decades.  But that was somewhere around 1933-1934.

Fast forward to 1938.  It was a different world, another place and time.  I will say, I can’t imagine getting into a tux, or suit and tie, or wedding dress to brave the Texas July heat.  Air conditioning wasn’t around at the time.  Yet, that’s what my maternal grandparents did, 80 years ago this month, July 13th, to be exact.  They were just country kids from family stock that the salt of the earth is made.

How about a few photos?

When I say Martin and Opal Atherton were true diamonds in the rough, I am understating the truth of this incredibly fine couple.  Anyone who knew them could write novels of their character — a character of one, not two.

Frankly, my novel, painting their portrait, would be as thick as War and Peace, or The Tale of Two Cities.  What I will give you today is a smidgen of a peek into my favorite human beings of the past century.

One of my favorite stories concerns a common practice when they were teens dating out in the east Texas woods.  My granddad had a horse he would ride to my grandmother’s house down the dirt road in Hunt County, Texas.  When he arrived at her house, he would tell the horse to go home, I imagine with a little slap on the behind (the horse’s behind, not my grandmother’s), and the horse would go all the way home without any distractions.  The old playwright comes out in me as I envision the empty-saddled horse passing by an old gas station/general country store.  My mind’s eye sees three old men in overalls leaning back in rickety wooden chairs out front saying, “Yep, there goes Martin’s horse.  He must be at that Opal girl’s house.”

A little boy’s memories of his grandparents surround small things. Small, but powerful.  Little memories that brought wisps of joy don’t have to be much.  Something like: a cold bottle of Coke, a peanut butter cracker sandwich or a well-stocked pantry filled with Oreos and variety packs of chips.  Also, things like the toys stashed behind a french door in the corner of the living room reserved just for me.  In the far back of the living room, away from the audio of the Philco television, my grandmother would sit next to me, reading softly from the dialogue bubbles of old comic books she had saved.  I can still feel the bristles of his late-night beard stubble while he hugged and kissed me good-night.  One of my favorite times was watching, and learning, as my granddad would cook out on his grill on a Saturday afternoon.  Before that, he would have detailed my mom’s car, changing the oil and spark plugs, usually before the crack of dawn.  It all goes to small efforts of great love.

Back In 1962, when my 18 year old mom needed to divorce my biological father (I was two years old), it was for reasons of security and safety for both of us.  The abusive situation was horrid, without any hope of changing for the better.  So much so, my granddad, with his well-known John Wayne attitude and a tad of Robert Mitchum looks, forged a deal.  He made a deal where he would pay all court costs if my bio-father agreed to cut ties, never to attempt to contact us again.  Part of the deal was my bio-father would be released from child-support (yes, it was that bad). An agreement was made rather quickly.  He told the judge he would help to raise me, to take me as his own.  Indeed, he and my grandmother were young enough to be my parents.  When I was born, he was only 41, she had just turned 39.  If I could remember, that would’ve been a major benchmark of one of my first memories of them.

In retrospect, I cannot recall a time when they did not support me and my endeavors.  They dropped everything to attend most all of my events, concerts, graduation, musicals, and plays.  I could always count on seeing them in the audience, cheering me on.

My young mom was a highly independent woman, doing all she could to “make it” as a single mom in the ’60s & ’70s.  She was my Mary Richards from the Mary Tyler-Moore Show.  She can still turn the world on with a smile and turn a nothing day into one that seems worthwhile.  She would not take funds from my grandparents, even when we lived in poverty.  So, it was a norm for my granddad, without saying a word, to covertly slip me a few bills whenever he shook my hand, while she was looking the other way.  Later, especially at his funeral 10 years ago, I found out he made that under-the-table-hand-off to multiple people, from the needy next door, co-workers, to their pastor’s kids.  He truly gave of himself. 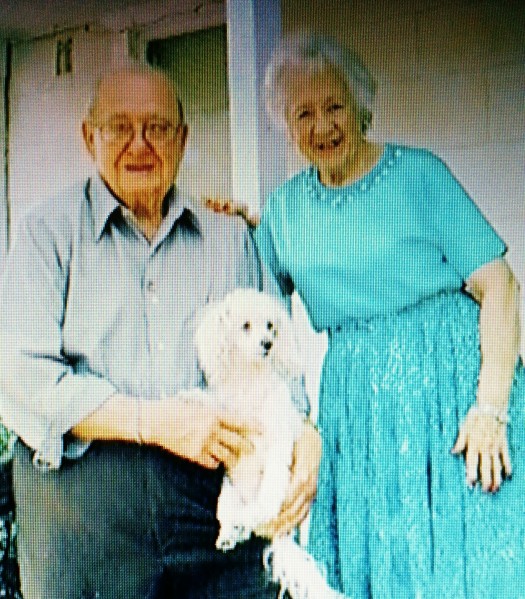 Giving wasn’t always monetary for the Athertons.  Texas thunderstorms are notorious for rolling in like a bulldozer, with 60 mph straight winds up front, followed by torrential rains.  Flash flooding is not uncommon.  If you live along a lake, creek or river, stay on guard.  Sometime in the early 1950s, laying in bed late one night, out in their country ranch home, a forceful squall came busting through the clouds.  Unforeseen night-time storms are the best times to snuggle up, close the shutters and hope for the best.  While doing just that, they heard cries of panic and whimpering in the distance outside.  The sound was painful to hear.  My grandparents couldn’t help themselves.  They jumped out of bed, with a flashlight in hand, and followed the bellowing into the pitch black night, with the driving wind and rain pushing them back.  They ran to a gully, a dry creek bed.  The flashlight spotlighted the reality of what the stormy dark night was hiding.  A flash flood was raging, carrying whatever was not tied down into its swift current.  Along the bank was a frightened litter of puppies and their mom.  The mom was doing all she could to get each pup in her mouth in efforts to move to higher ground.  There was no time to hesitate.  She would surely lose the majority of her children if someone didn’t intervene.  That’s exactly what my grandparents did.  Still in their night clothes, they fought through the raging, rising flood, reached the mom and her pups, rescuing them all from certain death.  Not one was lost.  THAT was the heart of Martin and Opal Atherton.

During WWII, my granddad struggled with the fact that his wounded older brother was in the thick of fighting the Nazis in France in a tank division, while he remained here raising his three kids and making a living.  At some point, regardless of his responsibilities at home, and with a newborn baby daughter (my mom), grit and patriotism kicked in.  He joined the navy and off he went to the newly liberated Philippines to keep the Japanese from returning.  It was the toughest separation for Martin and Opal.  They were so much in love.  Anyone who knew them could tell they were of one heart.  After the war was won, he came home on a Greyhound bus with his duffel bag on his shoulder.  As the bus arrived in the old square of downtown Greenville, Texas, my grandmother was anxiously waiting for him to step out of the folding doors.  I would give anything to have been a fly on the wall, just for a minute or two, to witness their loving reunion.  It has been said, right then and there, they promised one another they would never go anywhere apart from each other ever again.  They held to that promise, unless it was for a short men’s or women’s Bible class at their church, or a day of mechanical upgrade classes from General Motors.  God’s music score has its own arrangements.  He passed away about five weeks shy of their 70th anniversary.  She joined him eight years later after a lengthy battle with Alzheimer’s.  I would’ve loved to have been a fly on Heaven’s gate to witness their second loving reunion. 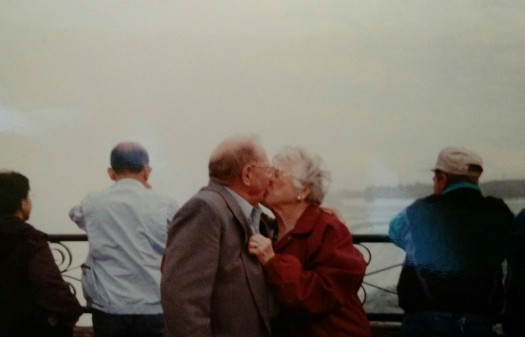 My mom still lives in their house.  It was a house always remembered as a refuge from the harsh world.  My memories of that house are caressed with warm feelings of safety, security and love.  The home inside that house was without harsh judgments, cursing and violence.  A few months after his death in 2008, a Google search of the address was quite the surprise to us all.  To this day, I think of this as a sweet gift from above.  Even after he had left us, the Google photo of the house showed my granddad looking away while standing on the front porch.  Although rare he would be on the front porch, it was oh, so natural. 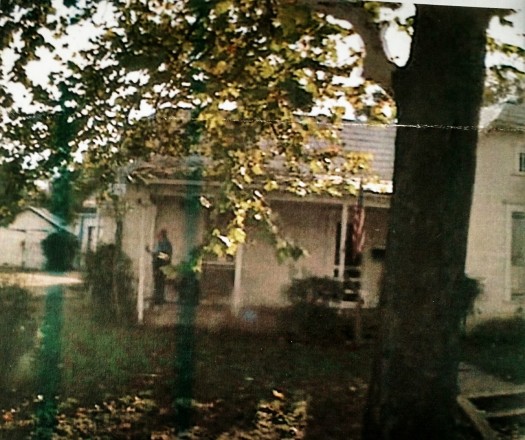 Whether it was stranded puppies, a toddler doomed for harm and hopelessness, countless missionaries around the globe doing righteous work, to an elderly poor African-American man down the street, they were there for whomever needed a friendly helping hand and a kind smile.  I dare say, without any reservations whatsoever, this writer would have been dead long ago, or in prison somewhere, if not for my grandparents who unconditionally loved me as if I were their son.

This was the last photo together and last kiss.  He passed away about a week later.

There’s so much more to share of the life of Martin and Opal Atherton.  Let it be known, they preached their funerals every day of their lives, always filling themselves with fuel for the race.

“Therefore, since we have so great a cloud of witnesses surrounding us, let us also lay aside every encumbrance and the sin which so easily entangles us, and let us run with endurance the race that is set before us.”  Hebrews 12:1 (NASB)